With their continued effort to fight ‘fake news’, Facebook has removed 32 pages and accounts from the Facebook and Instagram platforms. They released a statement saying that these accounts were involved in “coordinating inauthentic behavior”. Nathaniel Gleicher, head of cybersecurity policy went on to say:

About two weeks ago we identified the first of eight Pages and 17 profiles on Facebook, as well as seven Instagram accounts, that violate our ban on coordinated inauthentic behavior. We removed all of them this morning once we’d completed our initial investigation and shared the information with US law enforcement agencies, Congress, other technology companies, and the Atlantic Council’s Digital Forensic Research Lab, a research organization that helps us identify and analyze abuse on Facebook.

So far this is what the Facebook team has released about the accounts:

These bad actors discovered by Facebook were clearly advanced and very careful to cover their tracks. They used VPN’s and internet phone services, and only used third parties to run ads on their behalf. The Facebook team has acknowledged that the activity is similar to that which they previously saw from the IRA (A Russian based internet research agency) before and after the 2016 elections.
Here are some examples of the content and ads published by these accounts:

One of the accounts removed, “Resisters” had a scheduled event named “No Unite The Right 2” In Washington in DC. At the time Facebook removed the event, it had 2600 users interested in going, and 600 users who had already RSVP’d as attending. Facebook sent this image out to these users after removing the event and profile:

Facebook has acknowledged that they still don’t have all of the facts, and we will continue to report on this story in future social skim articles as more come in.

This week Facebook has released new tools to help in time management for the Facebook and Instagram Platforms. The team worked closely with mental health experts and academics to give users more information and control over the time they spend on the platforms. They also hope to provide parents with a better tool to foster conversations with teens about their online habits.
Ameet Ranadive, Product Management Director at Instagram, and David Ginsberg, Director of Research at Facebook, released the following statement:

“Today we are announcing new tools to help people manage their time on Facebook and Instagram: an activity dashboard, a daily reminder and a new way to limit notifications. We developed these tools based on collaboration and inspiration from leading mental health experts and organizations, academics, our own extensive research and feedback from our community. We want the time people spend on Facebook and Instagram to be intentional, positive and inspiring. Our hope is that these tools give people more control over the time they spend on our platforms and also foster conversations between parents and teens about the online habits that are right for them”.

Here is a view of what these tools will look like:

Here is the description released by the team on how to access these:

“To access the tools, go to the settings page on either app. On Instagram tap “Your Activity,” and on Facebook, tap “Your Time on Facebook.” At the top, you’ll see a dashboard showing your average time for that app on that device. Tap any bar to see your total time for that day. Below the dashboard, you can set a daily reminder to give yourself an alert when you’ve reached the amount of time you want to spend on that app for that day. You can change or cancel the reminder at any time. You can also tap on “Notification Settings” to quickly access the new “Mute Push Notifications” setting. This will limit your Facebook or Instagram notifications for a period of time when you need to focus.”

On August 6th, Alex Himel (VP of Local at Facebook) released a statement outlining a number of new updates and tools being added to the platform with the purpose of increasing local business engagement. There are currently over 1.6 billion users around the world connected to a small business on the Facebook platform. In Alex’s statement, he revealed that the team consistently gets requests to from both customer and business profiles to make connecting easier. As such, the team has announced that they will be doing the following:

It is worth noting that Facebook will still be listed in your connected Twitter apps, but will no longer work.

This week, Facebook released a new resource for teachers designed to help them improve digital literacy skills among young people across the globe. The team released the following statement about the new launch:

“Today we’re launching our Digital Literacy Library, a collection of lessons to help young people think critically and share thoughtfully online. There are 830 million young people online around the world, and this library is a resource for educators looking to address digital literacy and help these young people build the skills they need to safely enjoy digital technology.”

These new resources were built utilizing the research performed by the ‘Youth and Media team at the Berman Klein Center for Internet and Society at Harvard’. The press release went on to say:

“Developed for educators of youth ages 11 to 18, the lessons incorporate learnings from over 10 years of academic research by the Youth and Media team, and they reflect the voices of young people from diverse socioeconomic backgrounds, ethnicities, geographies, and educational levels. The lessons address thematic areas such as privacy and reputation, identity exploration, security, safety and wellbeing, and more.”

Earlier this week Snapchat released updates to its “Snap Chatter” audience insight reports. These reports provide markets with the top topics and trends being discussed among users within the app.
Here are some infographics released provided with these reports:

Linkedin Rolls Out Changes to the ‘Experience’ Design

In an official blog posted by the Linkedin team, they have announced changes to the ‘Experience’ design. According to the article, one of the top requests their team members receive is to create a better way to highlight past experiences and show career movement across each role. They went on to say that profiles which have more than one position listed in their experience section are viewed 29 times more often.
Here is how the team said the new design will work:

If you’ve held more than one position at same organization within one month of each other and they link to the same company page, they’re now automatically grouped. It’s that easy! By grouping this information you can spotlight multiple roles at a specific organization, while not risking the rest of your past experience getting pushed too far down on your profile. The new design is starting to roll out in the U.S. this week on desktop and mobile, and will be available globally to all members in the coming weeks. 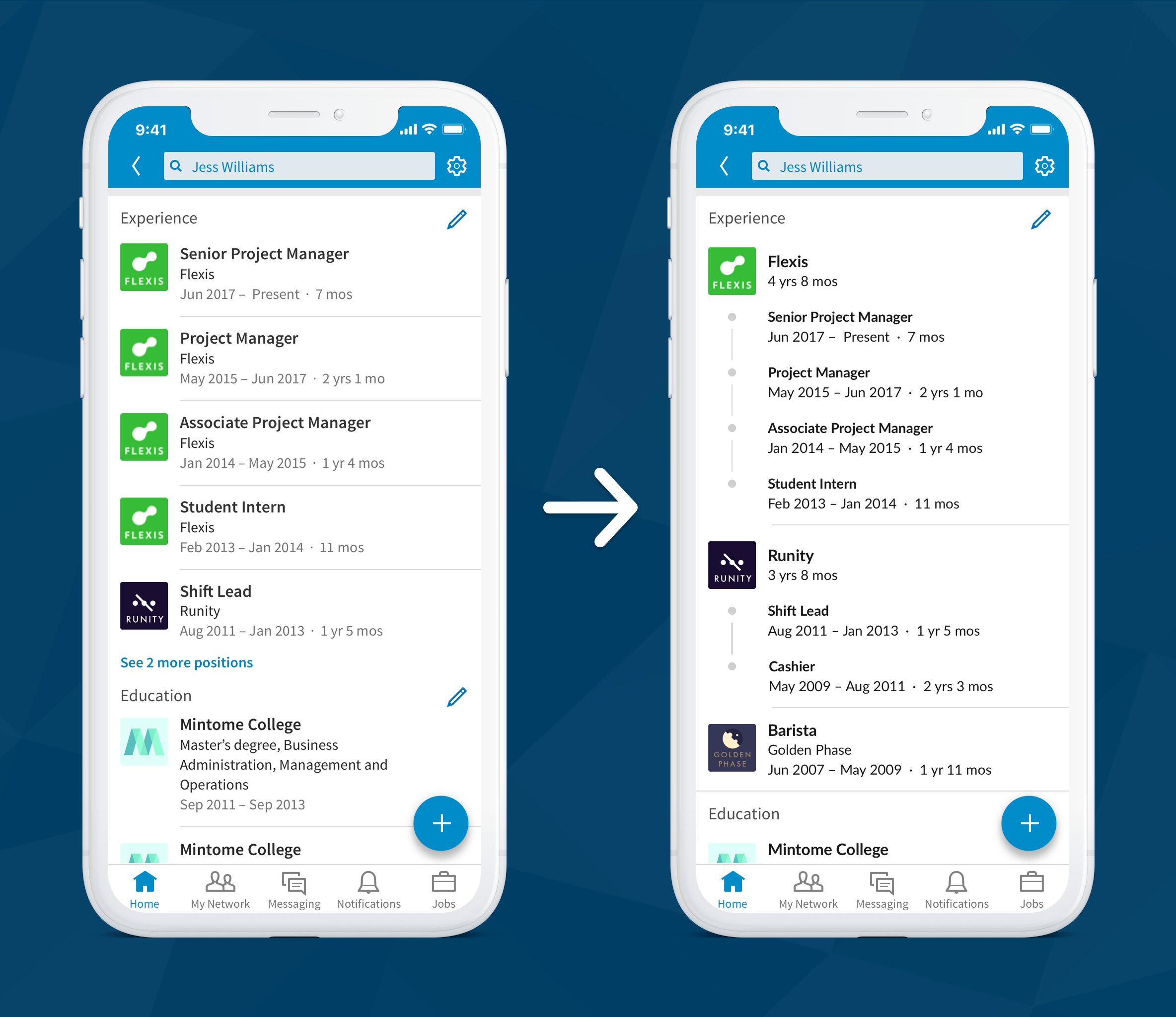