In an effort to push the platforms new AR (Augmented Reality) branded content, Snapchat has released 12 new shows. These “Snap Originals” will allow users to open “show portals” on their phone, and step inside AR scenes in the show.

Well-known producers are behind some of the content, including Bunim/Murray Productions (Keeping up with the Kardashians).

What we now know:
At around 2am ET, Facebook users from all over the globe began to report that they had been randomly logged off of their accounts. Soon after, Taiwanese hacker Chang Chi-Yuan announced that he discovered a vulnerability in Facebook’s platform and that he would use it to live stream himself logging into Mark Zuckerberg’s account and delete it.
Facebook instead offered him a bug bounty, and the hacker released the following statement:

“I am canceling my live feed, I have reported the bug to Facebook and I will show proof when I get bounty from Facebook,”

“Our investigation is still in its early stages. But it’s clear that attackers exploited a vulnerability in Facebook’s code that impacted “View As”, a feature that lets people see what their own profile looks like to someone else. This allowed them to steal Facebook access tokens which they could then use to take over people’s accounts. Access tokens are the equivalent of digital keys that keep people logged in to Facebook so they don’t need to re-enter their password every time they use the app.”

In total, Facebook released updated numbers stating that 30 million users had been affected, down from their original 50 million estimates. 15 million users had their name and phone numbers/email accessed. 14 million had their biographical information accessed including username, gender, language, relationship status, religion, etc. Users can check Facebook’s Help Center to discover if their information was accessed.

Facebook has rebranded its Camera Effects Platform to ‘Spark AR’. Additionally, they have expanded its use to include Instagram. The newly branded software will be aimed at allowing ad developers to create AR experiences for their audiences. Among the first users were Kylie Jenner, the NBA, Ariana Grande, and Gucci.

In an official release, the company described the new device as follows:

“What if you could easily connect with your closest friends and family and feel like you’re in the same room — even when you’re miles apart? Today, we’re excited to announce Portal and Portal+, two new video communication devices for the home that dramatically change the way we keep in touch. Thanks to AI technology, Portal makes video calling easier and more like hanging out, while a widescreen display lets you enjoy every moment together. When you can’t be there, Portal and Portal+ let you feel there.”

The portal and portal+ will have a 10, or 15-inch display, respectively. It will work through Messenger, allowing users to call to and from Messenger-enabled smartphones and tablets. The device will also support up to seven people at the same time. 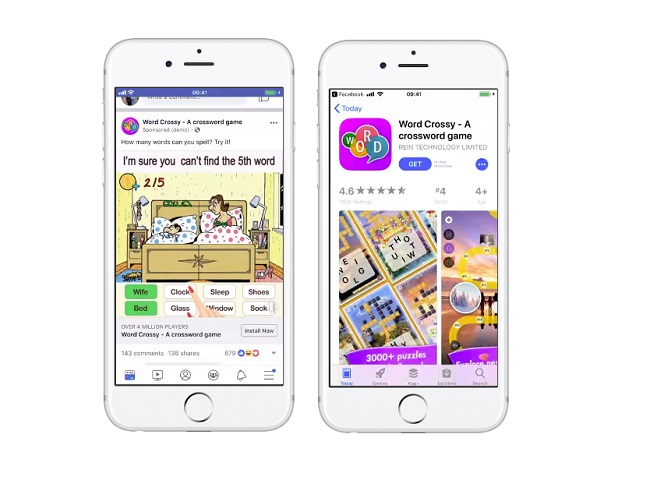 According to Facebook, 10-12% of app users stay active for 7 days, but that number drops to 4-5% after 30. As such, they have launched new retention optimization ads to help app advertisers acquire users likely to be highly engaged. According to an official post by the Facebook team:

“When used with app install ad campaigns, you’ll have the option to optimize for returns on day two or day seven after install in order to find users who are likely to return to your app and can help grow your business” 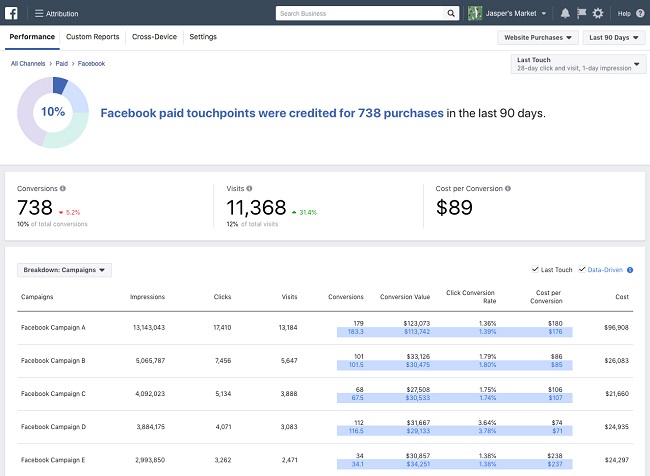 This week, Facebook announced that it would be targeting ‘Low-Quality’ ads, which negatively impact user experience. As explained by the Facebook Team:

“Low-quality ads on Facebook, such as ones that include clickbait or direct people to unexpected content, create bad experiences for people and don’t align with our goal of creating meaningful connections between people and businesses. We are now going further in our efforts to limit low-quality ads on our platforms by disapproving more of them and reducing distribution for more ads in our auction.”

Some of the ads which Facebook aims to target are as follows: 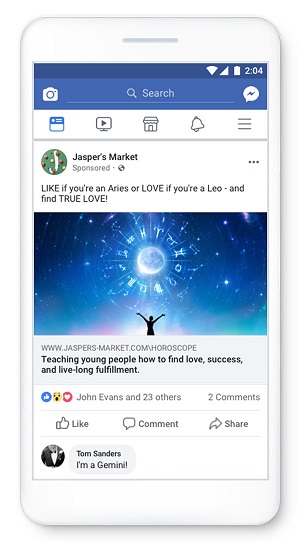 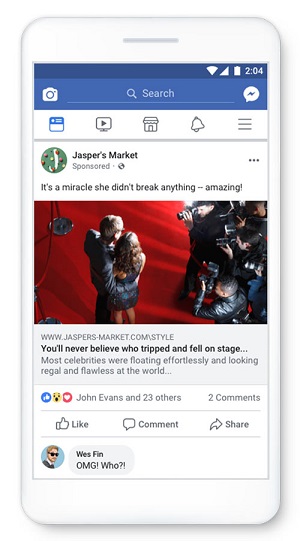 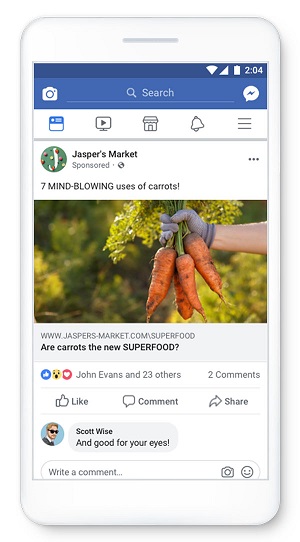 Here is a description of the penalties released by the team:

“Individual ads with low-quality attributes will see reduced distribution in our ad auction, or will be disapproved. This applies to all advertisers, but since we tend to see more of these characteristics in ads related to media, entertainment, politics or issues of national importance, they may be impacted more. Multiple ads flagged with low-quality attributes may impact the performance of all ads from that advertiser.”

This week, Facebook announced three updates to their branded content and brand collaborations. There were as follows:

YouTube has announced a partnership with Eventbrite and will now integrate with the platform. Users will now be able to see live upcoming shows by the artist they are watching, and even have the ability to be directed to a purchase screen. Facebook made the following announcing about the release:

“Over 1 billion fans come to YouTube each month to connect with their favorite artists and discover new music. Starting today, fans watching videos from YouTube Official Artist Channels will see Eventbrite listings for live music performances throughout the U.S. below the video. With one easy click on the “Tickets” button, they’ll be able to purchase directly from Eventbrite.”

This week, YouTube will now be adding TV screens as a device type in their targeting options. 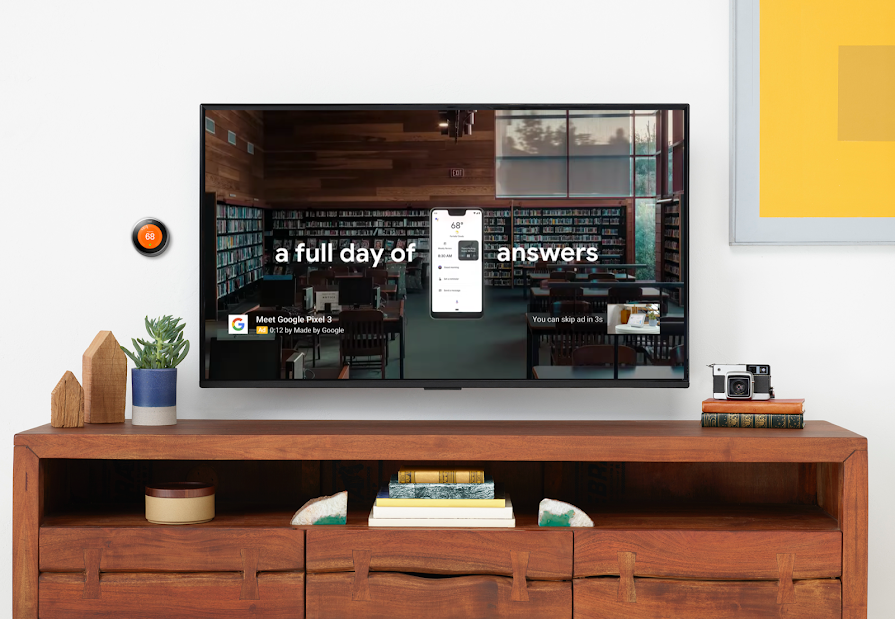 Here is the explain released by the YouTube Team:

“Today we’re launching the TV screens device type to make it easy for you to find engaged, valuable audiences while they are watching YouTube on that original device purpose-built for watching video: the TV. The TV screens device type joins computers, mobile phones and tablets in Google Ads (formerly AdWords) and Display & Video 360 (formerly DBM), meaning you can tailor your campaigns for connected TVs – for example, by using a different creative or setting a specific device bid adjustment. You can also see reporting for ads that run on TV screens to help you determine the impact of these ads within your overall mix.””

YouTube changes video “Watch” Metrics
YouTube has decided to change the registered engagement watch from 30 seconds, down to ten. It is worth noting, Facebook considers anything longer than 3-seconds a ‘watch’.
As explained by their team:

“Our system will now count an ‘Engagement’ whenever a user clicks or watches 10 seconds or more of your TrueView for action ad using maximize conversions or target CPA bidding”.