This is yet another example of the major social platforms copying one-another. Facebook, for instance, released this feature all the way back in 2016. The genesis of the decision to release this feature almost certainly can be traced back to the recent boom of podcasting. Periscope engineer Richard Plom released the following statement:

“Broadcasting with audio only in Periscope is something the community has been asking for, and have been doing already by covering the camera lens. Sometimes people are not comfortable being on camera, but they still want to broadcast and interact with others via Periscope’s powerful chatroom feature.”

In a post titled  “A New Resource For the Parents of Teens on Instagram”, a new ‘Parents Guide’ was announced. According to the article, the new guide will focus on three main things: “how to manage privacy, interactions and time on Instagram”. It provides parents with a complete synopsis of what Instagram is,  an overview of the Instagram platform, and detailed descriptions on how to manage comments, time, and privacy.
The author of the Article, Instagram  COO Marne Levine, released the following statement:

I work at Instagram, and I’m also a parent. That’s the lens I bring into the office each day, just like many other parents who work here. We know the social media landscape will continue to change, and we’re committed to being here every step of the way to make sure parents and their teens have the tools they need to make the choices that are right for them.

Facebook is aiming to make airline ads more relevant to those interested in travel with the expansion of an ad solution called ‘Flight Ads’.

The team released a statement saying:

Today, we’re making ads more relevant to people interested in travel with the expansion of an ad solution called Flight Ads.1 Flight Ads will enable airlines to reach more potential travelers based on people’s visits to other flight-related Pages, websites and apps. Previously, airlines could use Flight Ads to re-target customers who had visited their website or app searching for a particular flight. Now, airlines can reach more people who have expressed an interest in travel.

So now, if users are looking into holiday trips or browsing airlines or even looking at travel-related Facebook pages, they will probably start to see airline ads.
According to Facebook, advertisers are already seeing major results from these new ads. Air France has started using these ads to target US customers and has lowered the cost per click by 66%.

The new smart glasses can capture up to 70 videos or hundreds of photos on a single charge. They even transfer them to your phone wirelessly and are water resistant!
You can find them at Spectacles.com

Snapchat will be hosting a series of webinars to give marketers a better understanding of the Snap Pixel and eCommerce advertising on the platform.
The team released the following statement about the Snap Pixel events:

This webinar is for advertisers who want to learn more about the Snap Pixel. From how it differs from other pixels, the optimizations and attribution it enables, to implementation and troubleshooting, we’ll cover everything you need to know to power your eCommerce campaigns. It’s going to get technical, so marketers — bring your developers!

This webinar is for advertisers new to Snapchat who want to learn more about our suite of performance products. In this session, we’ll dive into the different formats, bid optimizations, and measurement solutions we offer to help you drive and track sales.

Twitter is testing out web basked bookmarks this week with plans to roll it out on a larger scale over the upcoming months. 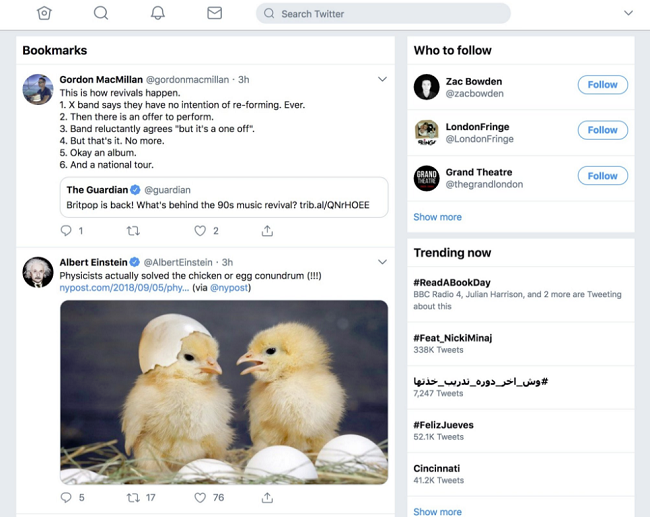 This feature allows users to mark content as something to view later, as opposed to just ‘liking’ it. The web version will enable users to view saved tweets across multiple platforms, rather than just in the app.

This week Twitter announced the banning of controversial Infowars founder Alex Jones.  They released the following tweet about the decision:

They also released a separate tweet saying they will continue to monitor and evaluate other accounts potentially associated with both Alex Jones and Infowars.